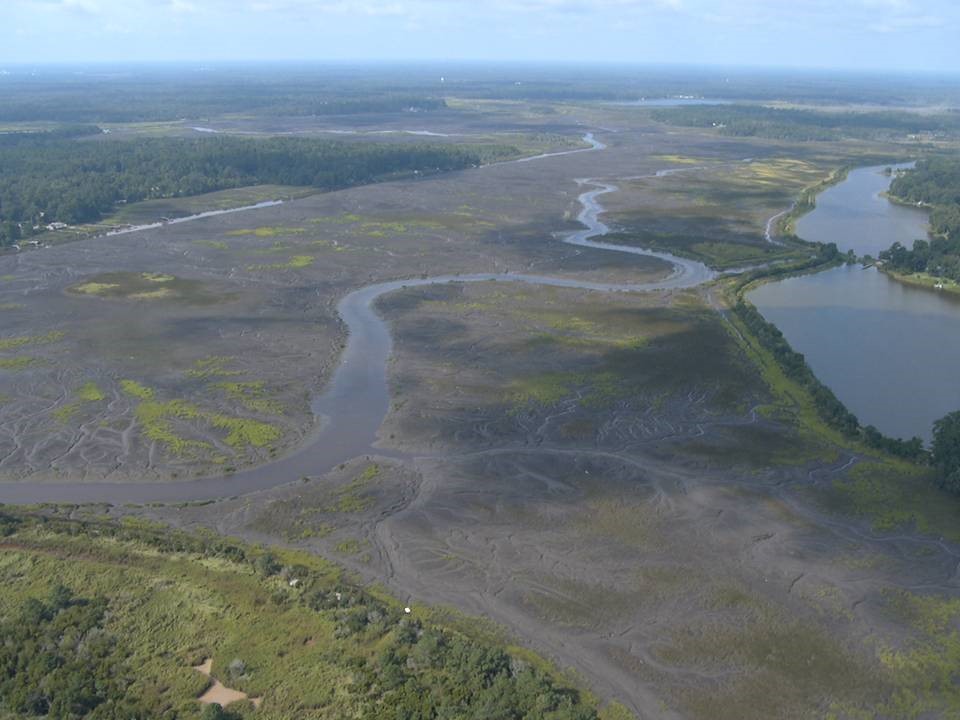 Reports of salt marsh dieback in Georgia began in the spring of 2002. These are areas of marsh with little or no live above-ground vegetation, and there have been no signs of recovery to-date. Areas with salt marsh dieback have now been reported in all of the Georgia coastal counties as well as in South Carolina, and they have caused great concern along the coast. Current estimates exceed 1,000 affected acres, with both Spartina alterniflora (salt marsh cord grass) and Juncus romerianus (black needlerush) affected. Once the plants die their roots and rhizomes decompose, and in some areas the marsh is down to bare mud and beginning to slough into the water.

Close-ups of tissue damage and insect larvae by Chandra Franklin

In recognition of the importance of this problem, the Georgia Coastal Research Council, working in collaboration with investigators from Louisiana, organized a workshop as a way for investigators in both areas to exchange technical information and to address the following questions:

In 2001 and 2002, Georgia experienced the largest dieback of salt marsh vegetation ever recorded, with ≥ 800 ha affected. Although the ultimate cause of the dieback was never established, the event has been linked to a severe drought. Two dieback sites located in Liberty County, GA have been monitored quarterly since 2003, one with extensive Spartina alterniflora dieback and a second with extensive Juncus roemerianus dieback. There were no consistent differences in porewater chemistry between healthy and dieback areas at either site, but there were increased densities of crab burrows in dieback as compared to healthy areas. Snail abundance was extremely low in the Juncus site whereas at the Spartina site densities were elevated in healthy areas. Both sites have exhibited signs of re-growth since March 2004. In the Spartina site plant density in the dieback transects increased from 0 stems/m2 in March 2004 to 18 ± 36 stems/m2 in June 2005. Over this same period average soil salinity decreased from 22.6 ± 5.8 to 13.3 ± 3. At the Juncus site, re-growth has been more substantial, with densities in dieback transects increasing from 88 ± 111 to 670 ± 611 since March 2004, but salinities were variable and did not show consistent trends.

In 2002, a team of scientists and graduate students from the GCE-LTER accompanied DNR-CRD staff on a site visit to the Jericho River in Liberty County, GA, where the salt marsh is exhibiting signs of die-off. The group performed transects at 3 sites exhibiting signs of die-back as well as at a nearby control site. Samples were taken for analysis of both physical (water and soil) and biological (plants, animal, microbes) characteristics.